It’s 1549 and people find themselves struggling, starving and destitute as the land that they held in common and supported their livelihoods is being enclosed by rich landowners for profit. For years ordinary working people have been increasingly exploited for the private gain of a privileged ruling class that pay little heed to their calls for equality and social justice.

Sound familiar? This is an important story…

Kett’s Rebellion is one of the most significant events in Norfolk’s history. Led by Wymondham man Robert Kett, a huge number of men and women from across Norfolk marched on the Norwich to make their case. They set up camp on Mousehold Heath, took control of the city and called for the king himself to hear their plight.

1549 tells the story of what happened to them over six weeks of summer; from the establishment of their own system of fair representation and justice to their brutal repression by a hired army.

If you are interested in joining us, please download the attached documents. Please read them and then fill in the Word file and return it to us.

This show is an adaption of the large scale community production that I wrote and directed with The Common Lot for a tour of Norwich’s open spaces in July 2016. The show was a big success and enjoyed by over 3000 people. This led to a grant from Arts Council England to develop the show into a touring production that can reach out to rural audiences. This tour is the first part of that process. 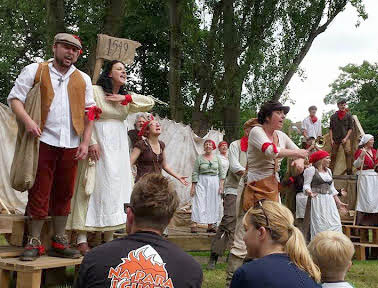 The show will have a “go-anywhere” feel to it. Five actors arrive, unpack and introduce themselves. They tell the story through a blend of pathos, comedy and song in a style that we have dubbed “Panto-documentary” , with plenty of opportunities for the audience to get involved.

In each place we visit we will enlist the support of local people to help us sing the songs, which we will teach in free community workshops before the show arrives in town. Tickets will be priced at £8 and £10

By Simon Floyd and Karl Minns

After a successful tour we will be looking to gain further funding to take the show on a much wider rural tour, and to the Edinburgh Festival in August 2018.

Want to download a poster or leaflet to display?

You can do that here by clicking on these links.

The people have spoken…

“Thank you – it was moving, funny, poignant and terrifically staged and sung. It made me proud to live in Norwich”

“Loved it! Just what I needed yesterday. It was an amazing and moving performance. Well done to the fantastic writers and cast!  Thank you!”

“Lost for words how awesome you all were today at The Whiffler Theatre. Got rather moist with laughter, tears and rain! But we were not for moving it just added to the riotous experience!”

“The play is so horribly relevant The poignancy has reduced me to tears ..so powerful, so cogent, so moving and also so incredibly funny… a huge achievement”

Debs
We use cookies to ensure that we give you the best experience on our website.Ok